The Next Silicon Beach…

The following article by Andrew Khouri appeared on the front page of the business section of the LA Times. It features some of the teams that I work with through UCI Applied Innovation. They are amazing founders, who are creating fascinating companies such as Soheil Divani’s O2Free, Nick Mangano’s SketchTogether.com, The Bulletin by Esosa Agbonwaneten, and of course our company: Adaptifyed. I’ve been very fortunate to watch them spread their wings as they’re getting off the ground, while I’ve been doing the same.

The next Silicon Beach? Orange County wants to build its tech community 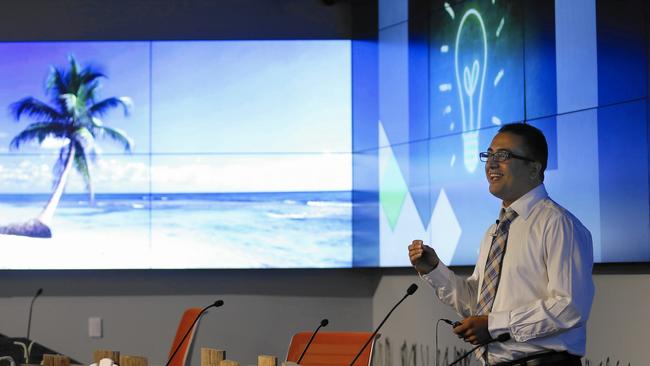 On a recent evening, a crowd of entrepreneurs, investors and tech consultants gathered at an office building near UC Irvine, drinking Heineken, playing pingpong and watching the San Diego Chargers take an early lead over the Pittsburgh Steelers.

But the socializing was just background for the main event: an emerging effort to connect Orange County entrepreneurs and financiers in building a local technology sector more like those in Silicon Valley and L.A.’s Silicon Beach.

Salar Soroori, a 36-year-old entrepreneur, stepped in front of a wall of televisions and pitched his company, Datavia Systems. It’s a new entrant in the burgeoning field of “big data,” the mining of business intelligence from massive databases.

After his presentation, he closed with a simple request: that he might chat with some of the business leaders, investors and tech executives. A short while later, Soroori walked up to the chief financial officer of a $6.5-billion company and talked up his venture.

So went the Monday Night Football pitch party at the Cove, a new UCI-backed venture that aims to help budding entrepreneurs both in and outside the university flourish locally — and not feel the need to move to the rival tech clusters in Los Angeles and the San Francisco Bay Area.

“Our end goal is to create hundreds of companies and thousands of jobs. We want to be the spark,” said Richard Sudek, an angel investor and executive director of UCI’s Applied Innovation institute.

“If you walk into a Silicon Valley Starbucks, there is probably 15 entrepreneurs and five VCs and five angels,” he said. “Well, in Orange County, where is that?”

Supported by a $5-million endowment from the Beall Family Foundation, a Newport Beach philanthropy that’s given heavily to UCI, the institute held a grand opening for the Cove this month.

The 31,000-square-foot space features an incubator for entrepreneurs just starting businesses and three accelerators to help them grow — all with the help of a network of nearly 400 mentors. Start-up funding is available from seven investment firms that maintain offices. Business advisory firms offer free help, financed by the Small Business Administration, and there’s the university’s Applied Innovation institute, which focuses on commercializing technologies coming out of UCI.

The event space itself could be the most important element of the effort, a place for the Orange County tech industry to gather informally and make connections that could launch new ventures. Its giant flat screens are spread along three walls. A game room with foosball and air hockey provides another venue for the kind of off-chance encounters that often occur more easily in places such as …

Read the entire article at the LA Times.com